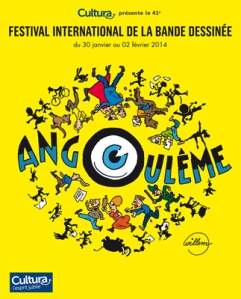 The city of Angoulême in southwest France is hosting the 41st annual Festival International de la Bande Dessinée from the 30th of January to the 2nd of February.

And Lora Fountain will be showing the latest and forthcoming titles from First Second, the Center for Cartoon Studies, Anomaly and filmmaker John Carpenter’s new ASYLUM series of comic books.